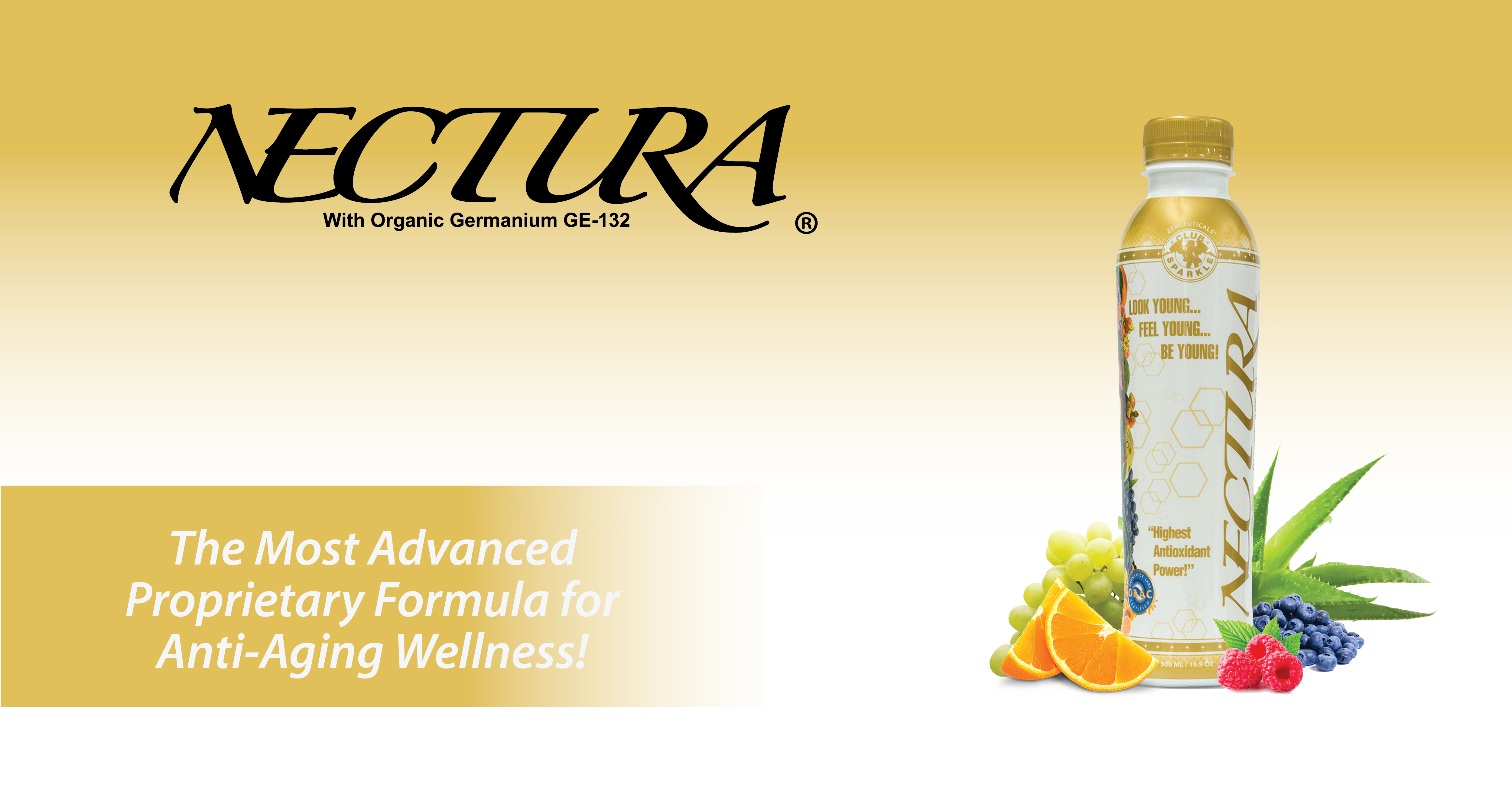 One of the most complex issues when deciding how to approach anti-aging wellness is how to effectively quell both naturally occurring and externally created free radicals that are harmful to the body.

I am excited to share with you the most effective method discovered by advanced scientific research in formulas; Nectura, the most advanced proprietary formula for anti-aging wellness!

There are endless ways to describe Nectura, delectable, healthy, enticing, versatile, nutritious, and rejuvenating are among only a few of the words that come to mind.

Nectura is beyond juice … It is the first and only multi-functional food supplement of its kind ever created! Though crafted to be the ultimate wellness beverage with a sensational taste, Nectura can be implemented into your daily diet in so many other ways.

Nectura’s anti-aging formula was especially designed with health and wellness in mind. As with all of our products, Nectura incorporates ION5, is packed with seventy-two essential minerals supercharged with our Energetics Technology™ that provide an optimal boost to your immunities. While Nectura can be taken on its own as a flavorful juice beverage, it blends well with EverYoung and ION5 to create a wonderful cocktail we call a Nectura Sunrise.

Being formulated and designed in Japan but made in the USA, Nectura adheres to the world’s highest standards. With America’s latest innovative technology when it comes to manufacturing supplements, and The Japanese Ministry of Health being most rigorous Health Compliance Requirements to meet in the World. Our products truly experience the best of both Worlds.

Though we recommend taking the full regiment of Nectura, ION5, and EverYoung, Nectura is particularly important for fighting off harmful free radicals in your body that can cause serious damage to your health.

The Role of Free Radicals in the Body

It’s about this point you might be asking yourself the million-dollar question: How will Nectura benefit my life?

Nectura, despite having numerous functions, is extremely effective against free radicals, both preventing and mitigating damage that free radicals might cause to your body.

What’s a free radical? In plain English? A free radical is a naturally occurring molecule that exists within the human body but can exist independently, free of an unpaired electron. How do free radicals survive within an atom’s orbit? Free radicals will attack other electrons surrounding an atom, feed off of them, and take what they need to survive. This process will, in simplified terms, will lead to cell damage, causing pre-mature aging and illness.

Over time, this will lead to increased damage throughout the body and in many cases, disease.

And though these free radicals are naturally generated, it is believed that they will grow in numbers from several outside sources as well, including but not limited to: cigarette smoke, industrial solvents, some medications, and environmental pollution to name just a few.

Perhaps most notably, free radicals will occur in greater numbers throughout the body as we age. The NCBI suggests that cancer is chief among the illnesses that originate in free radicals within the body.

What do we do to combat the negative effects of free radicals within the body? We harness the natural power of antioxidants.

One of the key ingredients in Nectura is organic germanium GE-132, a water-soluble organogermanium compound with a plethora of health benefits.

A recent scientific article published by Nature.com outlines many of these effects, which include but are not limited to:

GE-132 also behaves as an anti-aging composite, as GE-132’s compound has a protective effect on dermal cells, promoting healthier skin.

According to the same article by Nature.com, one of the most harmful occurrences within the human body is oxidative stress, which attacks dermal cells and results in numerous negative health effects, ranging from wrinkles and advanced skin aging at best and possible skin-related cancers and DNA damage at worst.

And what causes intensive oxidative stress of the dermal cells?

You guessed it. Free radicals.

As the National Center of Biotechnology Information states:

“The human body is in constant battle to keep from aging. Research suggests that free radical damage to cells leads to the pathological changes associated with aging.”

GE-132, by numerous studies cited in Nature’s article and elsewhere, has been shown to combat and suppress cell death due to oxidative stress.

In this never-ending battle, GE-132 is on your side, and so is Club Sparkle.

Nectura also incorporates ION5—72 supercharged essential minerals that act as a catalyst to help transport and absorb all the health enhancing ingredients Nectura has to offer.

Nectura’s exotic ingredients were all carefully selected to provide you with the greatest health benefits possible, all with one common goal in mind: harnessing the power of antioxidants.

One of the most prominent features of Nectura is its ORAC Score. Oxygen Radical Absorbance Capacity (ORAC) is a method of measuring the effectiveness of antioxidants to neutralize free radicals in the body.

Club Sparkle is proud of Nectura’s ORAC Score, which sits at 144,053 per liter; Nectura maintains the highest ORAC Score in the industry!

We’ve discussed Nectura’s ability to fight off free radicals, so let us look at some of the other ingredients found in Nectura.

Nectura is nutritious and contains 47 Phytonutrient extracts, and antioxidant extracts among its 120 ingredients. This includes a variety of fruit for vitamins and minerals, such as pomegranates for vitamin C, Goji Berry for protein and vitamin B1, B2, B6, and Vitamin E, and peaches for vitamin A, among many others … the list goes on and on!

With so many exotic fruit extracts, to say that Nectura is multi-functional does not do the formula justice.

Nectura is so much more than that.

Incredibly, these are only some of the most important aspects of Nectura’s multi-functional purposes!

Best of all, Nectura is an 8:1 concentrate, meaning one bottle yields so much more than it contains!

Like many signature Sparkle products, there are a variety of ways to incorporate Nectura into your daily routine. Though you can blend small amounts of Nectura with water to create a Nectura juice, you are limited only by your creativity when it comes to using Nectura!

Try using Nectura as a pancake or crepe topping or drizzling some on top of your favorite desert! Include Nectura in your favorite recipes, or even as a marinade for healthy barbecue-style steak.

A personal favorite of ours is incorporating Nectura, along with EverYoung and ION5 into a healthy smoothie!

We pride ourselves on the testimonials given by real people who have had their lives changed by Sparkle products, with Nectura consistently producing amazing results for our VIPs. Check out the video below of Alice Smith discussing all the ways she implements Nectura into her routine and how it has changed her life!

The possibilities are endless when you live a Life with No Limits!

Check out our Nectura product page for additional information on Nectura, as well as to pick up a bottle of Nectura for yourself.

As we always say, Look Great, Feel Great, and Be Great! Nectura will bring you one step closer to living the Sparkle lifestyle.